We all know that “seizing the opportunity” can sometimes come with great rewards. Leopards are the best at seizing an opportunity, being one of Africa's most prominent opportunists. So, when a small buck walked under a tree a leopard was sleeping in, the leopard took up this opportunity for a meal!
BOOK YOUR TRIP TO KRUGER: bit.ly/BookatKruger
LatestSightings.com caught up with 31-year-old, family business owner in Cape Town - Mikhail Messaris (the filmmaker of this spectacular sighting) and, excitedly, he explained: “This happened on the Ngobeni loop, off the H14, between Mopani and Phalaborwa. My wife, Candice, and I were making our way out of the park through the Phalaborwa gate when we decided to have a last look for a male leopard known to reside there.”
Send in your wildlife video here, and earn money: www.latestsightings.com/partnership
“We arrived at the Ngobeni loop shortly before lunchtime, a time when you would expect the big cats to be fast asleep. We spotted two other vehicles on the loop that had turned off their ignitions, obviously having spotted something. A few seconds later we realized they were not looking at the herd impala on the other side of the bank, but a male leopard standing in a tree seizing up his potential meals grazing below.”
“Over the next couple of minutes, he positioned himself in a way that would allow him to surprise a steenbok with an aerial attack. He demonstrated true patience by allowing the steenbok to be in just the right spot. Then, like a missile, he dive-bombed out the tree and landed directly on top of the steenbok sending the surrounding herd of impala into a complete snorting panic! The leopard then began making this way towards a big tree where he obviously enjoys his meals.”
“He easily cleared the small stream with his quarry before hoisting his meal. My wife and I have spent a fair amount of time traversing the central region of Kruger Park over the years, but we have had very few and far between sightings of big cats, let alone a hunt!”
“That thrilling moment of witnessing the drama unfolding before us will most certainly be hard to trump in the future. I don’t know how I managed to keep the camera so still?"
To license the footage:
Contact@LatestSightings.com 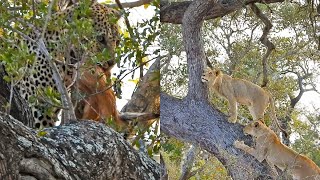 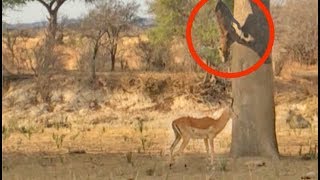 Leopard Jumps on Impala From Tree! 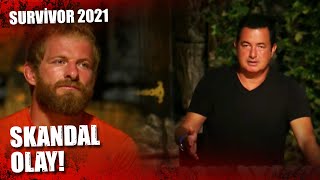 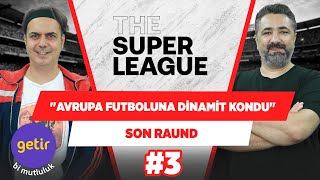 Kruger National Park After The Storm

Cheetah Walks Right into a Leopard

Male Lion Takes on Kudu in the Road

Leopard & Hyena Fight Over Impala While it Tries to Run Away

Kgalagadi chase between a caracal and a African wild cat

8:04
The Secret Life of my Hamster

Do you even lift bro? Cane Corso #Shorts